THE HOUSE OF NOBILITY IN FINLAND 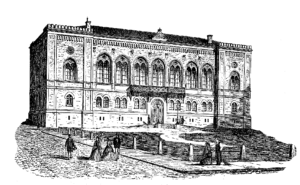 The history of the House of Nobility in Finland mirrors the nation’s way from being an integral part of the Kingdom of Sweden (until 1809) through the autonomy within the Russian Empire (1809-1917) and to finally the independence as the Republic of Finland in 1917.

The actual formation of the existing House of Nobility, and the founding of it, took place in 1818 as a result of the separation from Sweden and its House of Nobility and the peace treaty between Russia and Sweden. Finland became a Grand Duchy within the Russian Empire and was given the privilege to keep the Swedish constitution as a way of governing. This meant that an assembly of the four diets – nobility, clergy, burgers and landowners (peasants) – would be a governing body for the territory under the auspices of the Grand Duke – the Russian Emperor. This meant that the nobility had to be organized as a corporation.

In order to control who was of noble birth within the realm, genealogies of members of the Swedish nobility that remained in Finland were to be presented. When they had been cleared, the families were given a number within the rank that they had had in Sweden. The three ranks were: untitled gentry, Barons and Counts, based on the original Swedish Charter for the House of Nobility of 1626.

When Finland became independent in 1917 it was meant to become a Kingdom. But as things turned out it became a Republic. As it happened, the House of Nobility gained special status as a public corporation within the Republic, but lacking a sovereign this meant that ennoblement was henceforth out of the question.

The direct political influence was something the House of Nobility in Finland gave away voluntarily when it took part in the decision for a new and modern constitution. It was implemented in 1906, giving universal suffrage for all citizens to the parliament – then Lantdag, today Riksdag.

With the new constitution the purpose turned from the political arena towards looking after one’s own house so to speak – both figuratively and literally. The Nobility in Finland consists totally of 357 families, with about 6000 members in 170 families living today

Every third year the principal, the oldest male descendent, of every family gathers for a General Assembly in the Palace. The assembly is in session for a period of one month. The focus is on maintaining the Palace, overseeing contracts with tenants (main income), caring for the collections, archives and library and overseeing the activities of the staff (six in total). The assembly appoint a board of directors that oversees the economy in the periods between the assemblies. The chancellor and the rest of the staff are responsible for taking care of business on an everyday basis – including generating revenue for renting out the magnificent Great Hall in the Palace for dinners and other events.

Guarding the historical heritage in all its aspects is a good generalization that fits the description for the House of Nobility of today. Every third year a book of peerage (Adelskalendern) is published with current up-to-date information of the living members. A project to publish a new extended version of the genealogies of all the members of families – living as well as extinct – is under way with the first of five volumes published in March 2017. The Chief Genealogist is in charge of all that is researched and published by the House of Nobility as well as the care for the archives.

The important historical heritage is cared for in cooperation with Adelsförbundet, which arranges cultural and social events, seminars and exhibitions. Internationally this is manifested in the work with CILANE, where the youth organization FAUK is an integral and important part in this endeavour.